Over the weekend I went for a run.

What started as almost a 1-minute jog turned into a strong 2 miler. What changed the outcome? Being able to master my mindset. 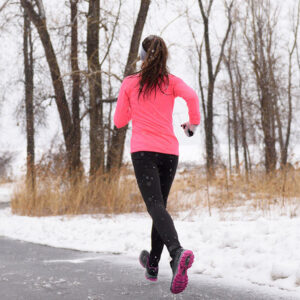 When I first hit the pavement the Midwest winter chill hit me full force. My lungs and nostrils were burning and it hurt to breathe. My hands felt as if they were slowly dying. The negative thoughts started coming in hot.

These thoughts almost convinced me to turn around. They almost won.

I chose to talk back to them instead.

“You may not get another sitter to go for a run in the next few days.”

I continued to play a game with myself and convince myself to run “just a bit further,” to see if the run improved.

“Then you can turn back,” I kept telling myself, although secretly I knew I planned to keep pushing myself further.

Before I knew it I was a mile in.

My body warmed up, my breathing regulated, and I felt strong and capable.

As I turned around and made my way back I thought about how I was able to overcome those negative thoughts and how thankful I was because my run ended up feeling so great. Those thoughts almost won though. I was so close to turning around barely a minute into the run.

Starting really is the hardest part.

No matter what you’re starting, remember that. Challenge yourself to keep going and to stick with it just a bit longer to see if it eases up. Most of the time it does and you’ll be thankful you persevered.

Contact Us
Hi, How Can We Help You?
Want FREE Eye of the Storm Mentality Tips?

Enter your info below!
Your information will *never* be shared or sold to a 3rd party.